III. Intellectual and Artistic Activity in the 15th century 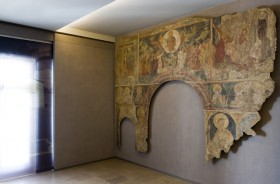 From as early as the 14th c. and above all in the 15th c., just when everything seemed to be leading to the collapse of the Byzantine Empire and the Fall of Constantinople, there was a remarkable upsurge in activity in intellectual and artistic circles.

Scholarly clerics and laymen, chiefly pursuing the theological questions of the age, produced noteworthy philosophical and theological treatises. Many of them become extremely active in the West. They familiarize the Western world with basic works of classical and Byzantine literature, thus contributing to the European Renaissance. A similarly heightened activity is observable in artistic circles. Byzantine art, and above all painting, develops in former provinces of Byzantium such as Serbia and Bulgaria and in regional centres such as Thessaloniki, Veria, Kastoria, Mistra and Crete.

Gradually a community emerges which, though part of the Ottoman Empire, is assimilating elements of East and West. It is in this context that the "Rum community" itself, transmitter of Orthodox Greek learning and Byzantine cultural tradition, will be formed.