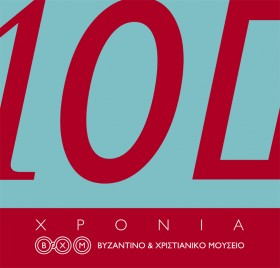 100 Years of the Byzantine & Christian Museum
The Byzantine and Christian Museum, one of the most important museums of Byzantine and post-Byzantine art and civilization in the world, is celebrating the centenary of its foundation in 2014. Therefore the diary of 2014 could only be dedicated to this anniversary.
For the Diary of 2014, an homage to the centenary, we have opted to present the Museums Permanent Exhibition, firstly because we believe that the completed new exhibition represents the greatest fulfilment of its obligations to the public at large, and secondly because the subject-matter serves to acknowledge the contributions of all those before us who are now part of the Museums history: the directors, curators, conservators, administrators, guards and colleagues both fêted and anonymous whose selflessness, ascetic devotion and academic excellence have provided the very foundations of our Museums present and future. It also sheds light on the generosity with which its museum specialists and other experts have given of themselves during the protracted preparations the project demanded. Our choice also highlights the Museums role in negotiating contemporary readings of the pastsubjects of key importance to a national museumusing updated analytical tools. It can thus be seen that this years diary is essentially dedicated to the Museum itself, to its exhibitions and to the people who have made it what it is today.
COORDINATION
dr Anastasia Lazaridou
ACADEMIC SUPERVISION  TEXTS
dr Anastasia Lazaridou
EDITOR
dr Jasmin Moysidou
MATERIALS RESEARCH - CAPTIONS
dr Antonis Bekiaris, Vassiliki Chorti, Sophia Giannioti
ENGLISH TRANSLATION
Michael Eleftheriou, dr Jasmin Moysidou
PHOTOGRAPHS (CORPUS)
Pavlos Chrabanis, Christos Galazios, Véronique Magnes, Yannis Stavrinos
PHOTOGRAPHS (WORKS CATALOGUE)
Byzantine & Christian Museum Photographic Archives
GRAPHIC DESIGNER
Yannis Stavrinos
DESIGN SUPPORT
Giorgos Soupios
PRINTING
REGISTER  Petros Kalamatianos
The "Lucky charm" of 2014 that is issued by the Association of Friends of the Byzantine and Christian Museum was created by the Artist Margarita Meitani and is dedicated to the Museums centenary (1914 - 2014).
Available in the Museum Shop.
Price: 20 euros (bronze), 35 euros (silver)