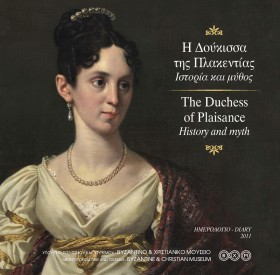 The Byzantine and Christian Museum diary for 2011 is dedicated to the Duchess of Plaisance. The product of Napoleonic France and philhellenic Romanticism, Sophie Barbé de Marbois, Duchesse de Plaisance (1785-1854) brought a unique dash of colour to Athens during its first decades as capital of the new Greek state. Her bequests to later generations include the buildings associated with her that continue to grace the city (including the Villa Ilissia, the home of the Byzantine Museum), but also the web of tales woven around her name in which real events are combined with exaggeration, invention and legend.

Entitled The Duchess of Plaisance: history and myth, the diary pieces together the glamorous, multi-coloured mosaic of the Duchesss life and mythology in paintings, publications, photographs and archive material.

The diary is accompanied by a temporary exhibition entitled The Duchess of Plaisance: the history behind the myth opening at the Byzantine and Christian Museum on December 17, 2010.