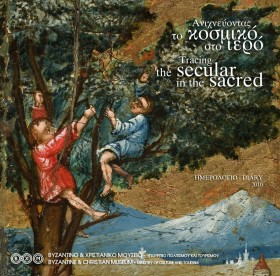 The Byzantine and Christian Museums diary of 2010 is going to be put into circulation in the following days.

The calendar traces the secular in the sacred. Its pages are embellished with details from icons, paintings and engravings from the Museums Post-Byzantine collections.

Despite the downfall of the Byzantine nations in the second half of the 15th century, the art of the Orthodox population of the Ottoman Empire kept the characteristics of the Byzantine pictorial tradition. Being mostly religious and liturgical, this form of art maintained special relations with the artistic achievements of the European Renaissance. On the one hand it seems fascinated by the use of geometric perspective or the realistic representation of human shapes and landscape and tends to it, but on the other hand it keeps using Byzantine perspective in stylization and sacredness. This tension, this constant struggle between the metaphysical and realistic, the heaven and earthly reality, the spirit and matter, is always present until the 19th century.

The persistence that the Post-Byzantine art shows for the Byzantine tradition, the metaphysical element and the sacredness is its most known characteristic to the public. What appears to be less known (as it hasnt been studied this much) is its other side: The way Post-Byzantine art represents the real, natural world or the distinctive, complex and remarkable solutions the artists invent to balance between the Byzantine and modern way of depicting.

The selected details insist to this kind of research, and at the same time they take particular care to bring out elements not only of amusement and joy of life but also of the curiosity for the earthly ones that exist next to the sacredness of the metaphysical in the same art-work.

The Byzantine and Christian Museums diary of  2010 comes at the price of 17 euros.

LUCKY  CHARM
The Byzantine and Christian Museums lucky  charm for the year 2010 is already being sold. It is inspired by a portable sundial dated between the second half of the 3rd century and the first half of the 4th century. It was found in the excavation of the Octagon of Philippi and is conserved by the 12th Ephorate of the Byzantine Antiquities in Kavala. A similar scientific tool seems to appear in Saint Catherines icons. A characteristic example is a portable icon by the Cretan painter Victor (second half of the 17th century) which is an exhibit of the Byzantine and Christian Museum. As this years diary refers to the artists attempt to reconstruct reality, similar to that the lucky  charm refers to mans effort to measure one of the basic parameters that compose it: time. This longlasting effort to comprehend the real world and its change to the better reminds us of one of the most essential human features, so let it be our guide for the year to come.

The lucky  charm comes at the price of 40 euros.