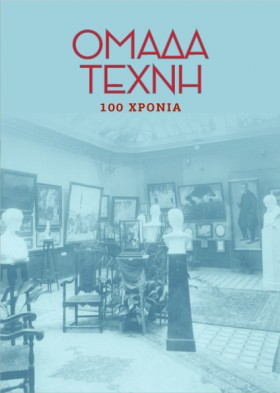 2017 marks the 100th anniversary since the creation of the famous Techni Group, which has been identifiedin the consciousness of those who deal with the history of modern Greek artwith the birth of modernism in Greece. Was the role of the Techni Group so crucial, in the few years that it was active? Did it truly revitalize the art scene in the capital, which was oversaturated with the long-standing dominance of the Munich School? What was the Groups relationship with Venizelos policy, which embraced the young artists initiative from the very first moment? The anniversary of the centenary offers an opportunity for a fresh look on the Techni Group through a showcasing of the works themselves.
The Techni Group (Omada Tehni / Art Group) was created on the initiative of Nikolaos Lytras (1883-1927), son of the famous Munich School painter Nikiforos Lytras. Nikolaos was thirty-four years old and was already established as a painter with bold innovations in his work. Most of the artists in the Group were friends and peers of Lytras. They were all born in and around the 1880s, except for Odysseus Fokas (1857-1946) and the younger Perikles Vyzantios (1893-1974). Among them, we find notable names such as the Alexandrian, Konstantinos Parthenis (1878-1967) or the Constantinopolitan, Konstantinos Maleas (1879-1928), admirable painters with less featured work, such as Theofrastos Triantafyllidis (1881-1955), Lykourgos Kogevinas from Corfu (1887-1940), Nikolaos Othonaios (1877-1950), and Othon (Otto) Pervolarakis (1887-1974). More obscure members included Stavros Kantzikis (1885-1958) and Dimitrios Stefanopoulos (1881-1932), and the Group was completed by two sculptors: Michael Tombros (1889-1974) and the lesser known Grigoris Zevgolis (1886-1950). The choice of an informal space for their exhibition, i.e., the offices of a newspaper and not the Zappeion Exhibition Hall or Parnassus, where the members of the Association usually exhibited, highlighted their intention to surprise and clash with the status quo, in a manner similar to the first Impressionist exhibition, held at the photographer Nadars former studio in 1874.
The exhibition was inaugurated on the eve of Christmas, 1917, by the Prime Minister Eleftherios Venizelos himself, in the presence of the young King Alexandros, the Minister of Transportation, Alexandros Papanastasiou, the Minister of Foreign Affairs, Nikolaos Politis and a large crowd of people. According to reports of that time, Venizelos stayed at the exhibition for a long time, talked to the artists, promised to take measures to enhance the arts and ordered the purchase of works from the exhibition, which are still hosted at the Liberal Club. The interest of the new government in the art of progressive artists was part of the broader modernist agenda of the Liberal Party, which was mainly expressed in the field of education with the educational reform. The exhibition, which included 144 worksmostly landscapes and portraitswas met with unprecedented success, welcomed thousands of visitors and was hailed by the press a renaissance, an authentic expression of modern Greek art.
Another extremely important exhibition, not only artistically but also politically, was the Techni Groups final exhibition, hosted in Paris, at the La Boétie gallery, and inaugurated on September 2, 1919, again by the Prime Minister, Eleftherios Venizelos, who was in the French Capital for the Peace Conference. This exhibition implemented a law passed by the Liberal Government (1598/1919), which provided for the hosting of exhibitions abroad, in order to promote the country. The collective Exhibition of modern Greek Artists was commanding in size, and included 200 paintings, engravings and sculptures. The painters Vyzantios, Othonaios and Triantafyllidis were absent from the original group, while additions included four new members: Dimitris Galanis, Markos Zavitsianos, Stavros Papapanagiotou and Pavlos Rodokanakis. The painter, Kogevinas, had the greatest presence in the exhibition, with 45 works, while Maleas and Parthenis participated with 30 paintings each; almost small retrospectives. The exhibition also included an honorary participation by the sculptor, Konstantinos Dimitriadis.  The value of the Paris exhibition lies in the decision of a brilliant and cultured politician, Eleftherios Venizelos, to associate a great historical moment, such as the end of the First World War and the Peace Conference, with an artistic event that promoted the intellectual forces of modern Greece.
The anniversary exhibition organized by the National Gallery in the exhibition halls of the Byzantine and Christian Museum is made possible with a grant by the Stavros Niarchos Foundation and aims to reintroduce the Groups three major events: the first exhibition, inaugurated by the Prime Minister, Eleftherios Venizelos and King Alexander in December 1917, a second one, which took place in the beginning of 1919, and the extremely important, both artistically and politically, final exhibition of the Techni Group that was held in Paris, at the La Boétie gallery.
CREDITS:
Exhibition Curation:   Marina Lambraki-Plaka / Olga Mentzafou-Polyzou
Architectural Design: Sonia Charalambidou