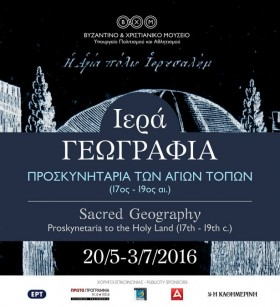 Pilgrimage to the Holy Land begins in the first Christian centuries and spreads after the establishment of majestic churches in Jerusalem. By the middle of the 17th century, the actions of the Jerusalem Patriarchate, the dependencies of the Holy Sepulchre and the systematization of zeteia (optional offerings of money) contributed to the flourishing of pilgrimage journeys. At that time, Pilgrims Guides (Proskynetaria) to the Holy Land appear, initially as manuscripts and later in standardized printed form. These travel guides, usually illustrated, are intended for Orthodox Christians; they also contain texts of moral tales and information regarding the Stations in Christs earthly life and Passion. The illustrations of the Proskynetaria mark spatial entities which serve as a map of the holy shrines, a holy geography of the places through which Christ passed during his earthly life.
The painted proskynetaria serve to bear witness to the journey of Orthodox Christians to the Holy Land, souvenirs of their pilgrimage easily transported in the form of a roll. The imagery of the painted pilgrims guides (proskynetaria) are directly related to the printed pilgrims guides to the Holy Land, which were the source of inspiration for the painters. Each scene usually corresponds to a particular shrine and is intended to display the sacred geography of the Holy Land.
Οn the 6th of April, 1905, Georgios Lampakis  a founding member of the Christian Archaeological Society (ChAE) and curator of its museum  began a pilgrimage tour of the Holy Land. During his pilgrimage, he collected, among other things (marble inlays, soil from the Church of the Holy Cross, pebble from the River Jordan with a scene of the Baptism of Christ, box with crushed plaster from the tomb of St Anne in Gethsemane), several objects, souvenirs of the Holy Land without particular archaeological significance, which he incorporated in the collection of the ChAE . The collecting of documentation of ecclesiastical life is ascribed to Lampakis ideological aspiration to demonstrate the uninterrupted continuity of Church history.
The video by the Israeli photographer Dafna Tal provides a clear and penetrating look at the sacred world of Christian pilgrimage sites of the Holy Land as well as the devotion, emotional charge and profound faith of those who visit.
Contributors to the exhibition
GENERAL COORDINATION
dr Katerina P. Dellaporta
Director of the Byzantine and Christian Museum
GENERAL SUPERVISOR: dr Maria Borboudaki, archaeologist
EXHIBITION CURATOR - TEXTS: dr Antonis Bekiaris, archaeologist
MUSEOGRAPHICAL DESIGN: Spyros Nasainas, architect
CONSERVATION: Thanassis Kavasis, Vassilis Mpakalis (minor arts),
Georgia Doskari, Angeliki Kalamitsi (paintings),
Artemis Kampouraki, Vaso Papakosta, Ioanna Stefani (paper),
Daphne Filiou (textile), Evi Stamouli (photographs)
GRAPHIC DESIGN: Yorgos Soupios, Yannis Stavrinos
PHOTOGRAPHS: Nikos Mylonas
VIDEO: Dafna Tal
TRANSLATION: Freya Rain Evenson
TECHNICAL SUPPORT: Petros Kalofonos, Thanassis Kavasis,
Yorgos Korkovelos, Akis Margaritof, Vassilis Mpakalis,